The word OkiDoku is a hybrid of the word Sudoku and the idea that Math can be OK for everyone.  What you see here is a 3X3 OkiDoku puzzle. 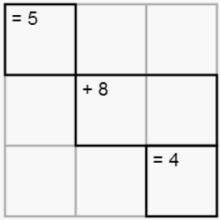 This puzzle contains 3 distinct numbers and obeys the following rules.

Link for playing the puzzle online.

Link to a Short video.

A quick introduction to OkiDoku Puzzles can be found in this article.  OkiDoku Puzzles are similar to KenKen puzzles.  In KenKen only consecutive numbers 1,2,3..n are used while OkiDokuo allows other numbers.

By solving OkiDoku puzzles, students will not only develop logical and high level thinking skills.  They also practice with number facts that could be important for other mathematical experiences.